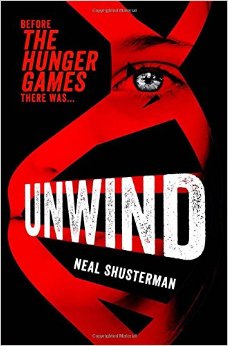 This is the sort of novel that sticks in your mind. While it’s not entirely plausible, it considers huge questions that stick with you for days afterwards.

Unwind is set in a dystopian USA, dealing with the events of a second Civil War, this time fought over reproductive rights. While the life of a child is deemed sacred until the age of 13, between 13 and 18, parents can decide to have their children “unwound”, whereby all of the child’s organs are transplanted into different donors, so life doesn’t technically end. This story follows Connor, whose parents decide to have him unwound because he is a difficult child, Lisa, a ward of the state who isn’t worth enough to live, and Lev, a tithe who was born to be unwound, all trying to escape their fates and bring about change as best they can.

I really enjoyed all three leads in this book, they all have distinct voices and go through their own brands of development throughout the novel. However, I did feel at times that this development happened a bit quickly, especially when it came to the romance between Connor and Risa, and the breaking down of the brainwashing Lev had been raised under.

There were some unanswered questions in the world-building as well. While I finally figured out that the reasons for such a high rate of teen pregnancy were a) that with the whole “life is sacred” thing, contraception was probably outlawed, too, and b) expectant parents could not be sent to be unwound, so it was a preventative measure as much as anything, neither of these facts were made very clear in the book itself. Other concepts such as “storking” (leaving an unwanted baby on a doorstep, and the people who find it being obligated to take it in) also seemed a lot more trouble than they were worth, but the writing was good enough that I was happy to hand-wave that.

Usually I am not a fan of present tense writing, but the pacing of this book was so fast that the present tense was really effective and really made you feel like you were right there in the scene. The POV changes were often quite rapid, but that gave the narrative a sense of urgency.

While this is now a series, it is my understanding that it was never actually intended as one. This book wraps up really well, with some heartstring tugging, as well as the possibility for revolution and change in the future. I actually don’t really feel the need to continue the series, though I might keep it at the back of my mind.