Due to illness, other commitments and then a three-week overseas holiday, it’s been over a month since I last did a WWW post. July wasn’t much of a reading month but I’ve been making up for that in August so here is everything I’ve read since mid-July.

Cupid’s Match by Lauren Palphreyman, which did take some rather large liberties with Greek and Roman mythology (what has Pandora got to do with the Seven Deadly Sins, a Christian construct, for example?) but it was kind of fun regardless.I gave it three stars and reviewed it here.

Mother Tongue by Julie Mayhew took me a while to get through. It’s written in a very disconnected style and it didn’t really go anywhere? Here’s my review.

I stood in a second-hand shop in New York City and read The Book With No Pictures by B. J. Novak. My partner had told me about it before so I was interested to finally see it. It was quite funny. I can imagine kids loving it. 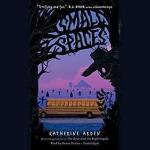 Small Spaces by Katherine Arden was next. It took me a while to get through. It’s a MG and I guess I wasn’t the target audience really. I was hoping I would find it creepier than I did. I did find the narrator’s voice a bit grating, which didn’t help.

I finished Cleaning House by Jeanne G’fellers the following day. I loved the basis in Appalachian folklore but I found the narrative itself a little too repetitive. But if you like quiet, character-driven folklore-y/witchy stories, then this is definitely for you. Here’s my review.

Next I read Good Omens by Terry Pratchett and Neil Gaiman and… wasn’t that impressed? I mean, I gave it three stars. But the way everyone talks about it, I was expecting to give it five. And I honestly thought at the start that I would, because the start is great. But then it got to dragging. Anyway, I have a full review scheduled, so keep an eye out for that.

For something completely different, I followed that with Women of Wasps and War by Madeleine D’Este, which was un-put-down-able gritty feminist fantasy and my favourite book so far this month.

Finally, I finished A Wrinkle In Time by Madeleine L’Engle, which was okay, but I was definitely skimming by the end. I know a lot of people love it but I think a lot of those same people read this as children, which I think would make the difference.

I also posted reviews of Lair of Dreams by Libba Bray and The Nowhere Emporium by Ross McKenzie since my last post.

I only just finished A Wrinkle In Time this evening, so I haven’t started a new book yet.

I have The Horse and His Boy by C. S. Lewis audio book  to put on my phone. And I really want to start Gods of Jade and Shadow by Silvia Morena-Garcia. I’m getting behind on my Australian Women Writers Challenge, though, so that also needs to be a priority.

I was unfamiliar with the Beslan school massacre of 2004 until I read the summary of this book. I requested a copy because I wanted to know more, and I also thought this might be a book to really move me.

In the end, I was a bit disappointed. The writing style made me feel very disconnected from the main character, Darya, and what was going on in her life. I think this was probably a deliberate stylistic choice. For one, the idea of it is that the story has been translated from Darya’s Russian recount of the story. And secondly, she is heavily broken by the events that take place. But ultimately it meant I didn’t feel truly connected and when I wasn’t reading, I didn’t feel the need to pick up the book again (hence taking so long to finish).

Having said that, the writing is consistent and tight. It probably would appeal to other readers. The story doesn’t… really go anywhere? It is really about Darya as a character, rather than any plot, which is not my favourite style. The Beslan siege didn’t actually play that big a part in the story, either. I think the story could have progressed from any number of personal tragedies.

The story comes full circle in the end, which I think some readers will find satisfying, but I found it a bit pointless. Actually, “pointless” sounds a bit harsh, but I did sort of feel that I was back where I started.

After taking a month to get through one audio book, I finished two this week! First was Lair of Dreams by Libba Bray. I didn’t love it as much as the first book but it definitely had its moments. Haven’t decided whether to continue the series on audio or grab the paperback of Book 3. 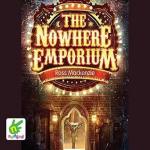 Next, I listened to The Nowhere Emporium by Ross McKenzie, which was a sort of middle-grade version of The Night Circus. I tend to enjoy anything that’s full of whimsical magic rooms, so I enjoyed this one.

No physical books finished this week but I did post my review for Beau and Bett by Kathryn Berla. Click the title to read it.

I am about halfway through the ARC of Mother Tongue by Julie Mayhew. It’s well-written but not the easiest read so I am taking a bit of a break from it.

In the meantime, I am reading Cupid’s Match by Lauren Palphreyman, which… I mean. I can see why mythology purists are upset about it. But I’m just enjoying it for what it is. I’m not even sure I’m really seeing it as a mythological-characters-in-the-modern-day story so much as a general urban fantasy. It’s fun.

After promising last week that I would finally continue with The Chronicles of Narnia, I have The Horse and His Boy audio book from the library and ready to be copied onto my phone. Just need to get around to it.

P. S. If you’re keen to read an excerpt of my current WIP, come on over to my writing blog to see what I’m working on.

Better results this week than my last couple of WWW posts.

I finished Beau and Bett by Kathryn Berla and… I don’t even know what I felt. It wasn’t a bad book. It was readable. But it was just sort of… there. I didn’t really feel like it did anything particularly interesting or different. So I have to really think about this one before I review it. Maybe I won’t give it a rating? That might help.

While I’ve been staying with my parents this week, I finally read The Lion, the WItch and the Wardrobe by C. S. Lewis for the first time. I watched the BBC series a lot as a kid but never got into the books at that point. I intended to read the whole series ago and never got any further than the Magician’s Nephew. Maybe now I’ll finally get back to it properly.

Iam reading an ARC of Mother Tongue by Julie Mayhew, a YA novel set around the events of the Beslan School Siege in 2004 (look it up). So far it seems it’s more about the personal effects on a family, rather than the wider political situation, which I appreciate.

I am still going with Lair of Dreams by Libba Bray on audio. I haven’t actually listened to it much at all this week because I’ve been staying with my parents and being sociable. 😉

All right, you lot! Hold me to The Horse and His Boy by C. S. Lewis. I will finish the Chroncles of Narnia before the end of the year!

P. S. If you’re keen to read an excerpt of my current WIP, come on over to my writing blog to see what I’m working on.