I do love a good cover reveal, and this one is particularly stunning so I’m excited to take part. Back about six months ago, fellow blogger Kate Sparkes was releasing her first book, Bound, and now the second book in the trilogy, Torn, is coming out! Here’s the synopsis:

Aren Tiernal knows that safety is an illusion, that his cruel and powerful brother Severn will never forgive his betrayal. Still, returning to Tyrea to challenge Severn for the throne would be suicide. It’s not until Severn himself comes to collect what’s owed to him that Aren decides to risk everything in an attempt to bring down the most powerful Sorcerer Tyrea has ever known. It’s a mission that seems doomed to fail, but it’s Aren’s only chance to save himself, his country, and the woman who thawed his heart.

Rowan Greenwood has troubles of her own. Though she has potential to become a great Sorceress, years of being closed off from her magic have left her unable to control her incredible power. When a pair of ominous letters arrive from her home country, Rowan has to choose between her new life and a chance at saving a family member’s life—and just maybe changing an entire country’s beliefs about the evils of magic.

Torn apart by separate quests, Rowan and Aren will have to discover untapped strengths and confront their darkest fears in order to overthrow a ruler determined to destroy them both.

And now for the moment of truth: 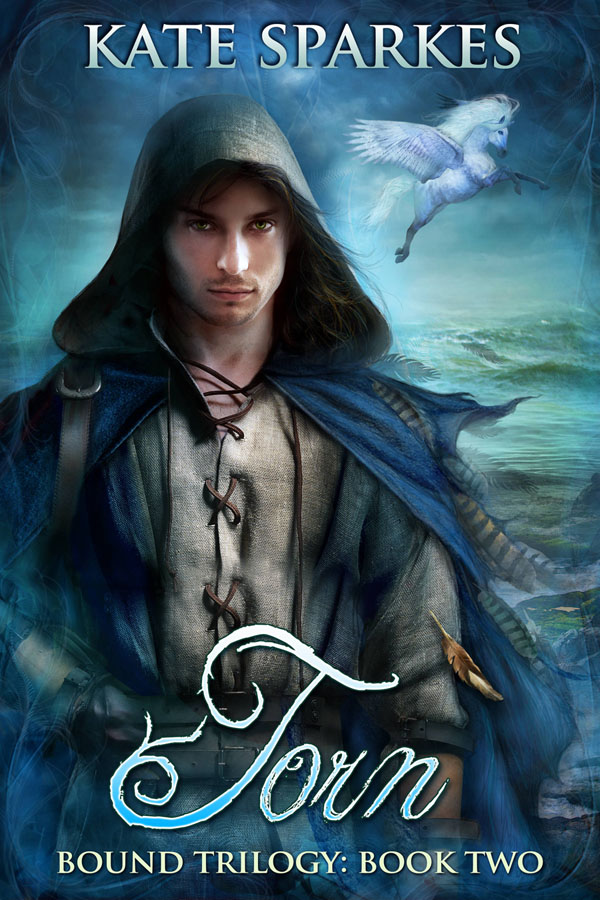 I said it was pretty stunning, didn’t I? Torn is being released at the low price of $2.99 on March 31. Pre-order now on Amazon so you don’t miss out on the special release price.

But wait! There’s more! If you haven’t read Bound already, you’ll be mighty confused when you try reading Torn. But for this week only, Bound is available for only 99c, which gives you really no excuse to not read it and catch-up! 😉 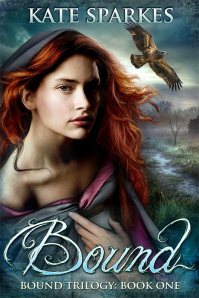 Disclaimer: I was given a free copy of this book in exchange for an honest review.

Now that that’s out of the way, I want to say upfront, the reason that this book doesn’t get five stars from me is not necessarily that I don’t think it deserves it, but simply because there are certain aspects of it that are quite popular in this genre and no doubt appeal to a lot of people, but just never quite work for me. I’ll go more into that as this review goes on.

Bound is set in the kingdom of Darmid, where magic is banned, and magic hunters will kill anyone who exhibits magical ability without a second thought. Their neighbours over the mountains use magic quite happily, and are at home with the company of other species such as dragons, griffons and merfolk, and that just makes those from Darmid more suspicious of them. When Rowan, a young woman from Darmid with a love of fairytales and a life-long plague of awful headaches, unintentionally saves the life of Aren, one of her country’s biggest enemies, everything she’s ever known is called into question and she begins to learn that there’s much more to her than she realises.

I really enjoyed the way Kate Sparkes turned some well-used fantasy tropes on their heads, particularly regarding her female characters. They were not required to be pure, medieval maidens (even strong ones), and the fact that Rowan had not yet slept with the man she was betrothed to was considered even a little odd.

Aren was a a rather typical YA hero, and to be honest, I was far more interested in Rowan’s chapters than his (the novel is written in first person split narrative). However, this is one of the aspects I mentioned earlier that I know is really popular in YA fiction, and I know the YA crowd will probably really love him. He’s just not my type. I felt his change of heart and subsequent feelings for Rowan developed a little quickly, but it’s a bit of a catch-22, since without that, there would be no plot. I did, however, enjoy learning about Aren’s magic, and how magic works in his kingdom. Kate has clearly done a lot of work on her world-building.

Bound ends with a nice set-up for Book 2. There is still plenty that Rowan needs to learn, plenty of danger still lurking, and some interesting new characters we don’t know too much about. Kate is certainly a talented writer and I look forward to reading more! 😀

So what I’ve learned recently, and as I complained on Twitter the other night, the problem with writing a derivative work is that if the original source says two characters had sex in a barn, then that’s what you have to roll with. So, uh, thanks for that, Arthur Miller. I posted that tweet on Thursday, and, well, Abigail and John Proctor are still just hanging out in said barn, being kind of awkward with each other (awkward I can do! Awkward is easy!). Though in my head, I have at least got as far as John removing her bonnet AND stroking her cheek, which I’m sure in Puritan Salem practically amounted to an affair anyway.

During the past week, Afflicted got to the point where I ended up putting it into Scrivener so I can more easily keep track of what I’ve already written. Initially, I had been writing chronologically, but then I wrote a scene that takes place not long before the events of The Crucible, and then the Abigail/Proctor stuff, which is somewhere in the middle. I spent half an hour writing something of an outline for the rest of the story this afternoon, though at the moment it does feature items such as “A scene that shows Proctor’s violent side and how Abigail reacts to it” and things like that that don’t actually help me much because I’ve still got to figure out exactly what takes place in them.

So! Today’s WIPpet. Today is the 25th and 5-2 = 3, so you get three short paragraphs. Those of you familiar with The Crucible may remember that Abigail uses the fact that she saw Mary Warren sewing a poppet and sticking her needle into it when she’d finished as a way to incriminate Elizabeth Proctor in the witch trials. It’s only recounted in the play, but since I’m writing from Abigail’s POV, obviously I need to show it.

Back downstairs, Abigail, Betty and the other girls along with Reverend Parris, Reverend Hale and the judges from the court all crowd around the table. Abigail ensures she is seated on a corner of the table; the plan she has in mind will be more easily enacted with a little space around her.

She waits until everyone is nearly finished dining, her hand on the needle in her pocket. When she thinks it is time, she draws the needle out and after only a moment’s hesitation, drives it into her stomach. Pain shoots through her entire body and she gives a loud cry as she lets herself fall to the floor.

“Abigail?” In seconds, her uncle is playing the part of concerned guardian, just as she expects. He circles the table and crouches next to her. She waits a moment more until she is sure all eyes are upon her, and then slowly pulls the needle out of her skin.

I’m trying to convey in scenes like this that even when she puts herself in situations where she’s in pain (physical or mental) there’s still one half of her brain completely detached that’s just making sure that everything is still following whatever plan she has set out. I mean, the way she acts sometimes, I can kind of see why some people would call her a psychopath.

I was going to get this post finished all early-like, but then I got distracted trying to clean the kitchen and then the Hunger Games was on TV, and now it’s really time I considered going to bed. To join in on WIPpet Wednesday (and please do!) simply post a snippet from your current WIP (geddit? WIPpet) that somehow correlates to the date, and then join us at the linky. I’m going to head off and go read some more of Kate Sparkes‘ novel, Bound, which will be officially released tomorrow, but there are e-book links up on her blog already so y’all should go get it. 😛

Fellow WIPpeteer Kate Sparkes is releasing her debut novel, Bound, on June 26, and I’m incredibly excited to be part of the cover reveal today. We’ve been reading excerpts from this novel on Wednesdays for a while, so we’re all pretty psyched about finally getting to read it in its entirety!

Welcome to Darmid, where magic is a sin, fairy tales are contraband, and the people live in fear of the Sorcerers on the other side of the mountains.
Rowan Greenwood has everything she’s supposed to want from life— a good family, a bright future, and a proposal from a handsome and wealthy magic hunter. She knows she should be content with what she has. If only she could banish the idea that there’s more to life than marriage and children, or let go of the fascination with magic she’s been forced to suppress since childhood.
When Rowan unknowingly saves the life of one of her people’s most feared enemies, a simple act of compassion rips her from her sheltered life and throws her into a world of magic that’s more beautiful, more seductive, and more dangerous than she ever could have imagined.
Now Rowan might just get everything she ever dreamed of— that is, if the one thing she’s always wanted doesn’t kill her, first. 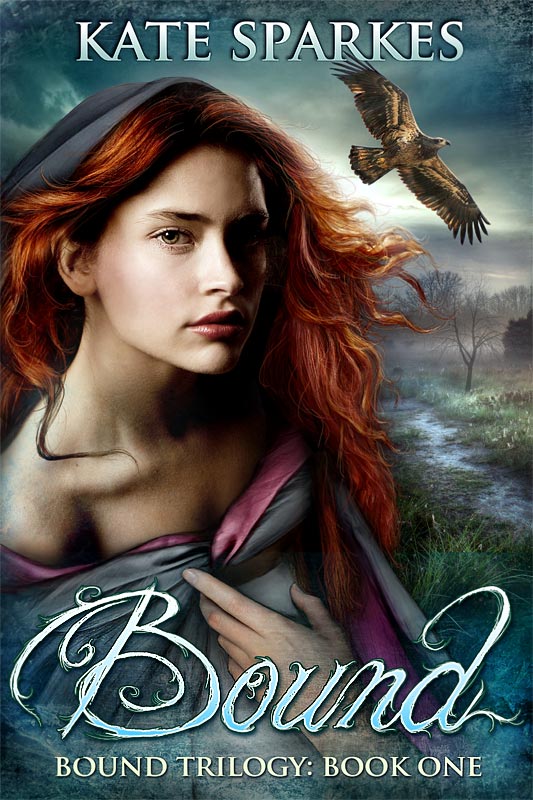 ^^ Doesn’t that look awesome?! The cover design is by Ravven
.
.

A Bit About Kate:

Kate Sparkes was born in Hamilton, Ontario, but now resides in Newfoundland, where she tries not to talk too much about the dragons she sees in the fog. She lives with a Mountie, two kids who take turns playing Jeckyll and Hyde, three cats with more personality than most people she meets, and the saddest-looking dog on the planet. Her first novel, Bound, will be released in June 2014, assuming the dragons don’t eat her, first.

You can find Kate in various places around the Internet, including her blog, Disregard the Prologue, Twitter and her Facebook page.