This book is widely considered to be something of a modern Australian classic, and I have to admit, when I first started reading, I was expecting something a bit deeper. It is really a bit of a fluff piece.

But don’t let that put you off. Sure – not a lot happens, but the descriptions really place you in 1950s Sydney, and the characters are all unique and vibrant.

I enjoyed the framing device of work at Goodes’ Department Store – each of the women in black (so named because of the black dresses they wear at work) has her own story outside that the others may or may not be aware of.

My favourite character was Magda, a Slovenian migrant who works in Model Gowns, and takes new high-school gradute Lisa under her wing. I also felt for Patty, who has an unfeeling, clueless husband and gossipy sisters, but who is heading towards a  proper happy ending by the end of it.

Anyone who reads my reviews regularly knows that I am not generally a fan of character-driven fiction, but I definitely found this one engaging and fun.

This review is part of my 2019 Australian Women Writers Challenge. Click here for more information. 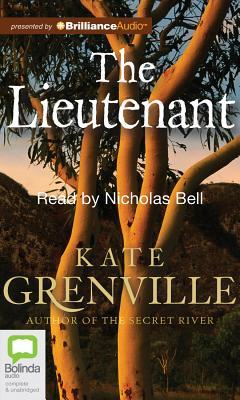 When I first finished this book, I gave it four stars, because I wasn’t quite sure that I liked it enough to give it a full five. But since I was still very much thinking about it the next day, and found myself poring over the digitised versions of William Dawes’ notebooks (William Dawes being the real life lieutenant from whose life and work Kate Grenville took inspiration for this book), as well as still smiling and slightly tearing up over the way the book ends, by the time I got to writing this review, I decided it deserved to have its rating upped.

The Lieutenant follows the story of Daniel Rooke, an outsider in his native England, who joins the First Fleet on its voyage to the new colony of New South Wales. Once here, he sets up camp in an isolated spot to better his chances of accurate astronomical observations. The local indigenous people soon start to visit his camp, and as a linguist also, he begins to learn the intricacies of their language. This leads to an intimate friendship with a young girl called Tagaran, from whom he learns a significant portion of the language. But her lessons and their friendship are interrupted when Rooke is given an order that will change his life forever.

I’m still pretty new to historical fiction, so when the first part of the novel was taken up with Daniel’s growing up years in Portsmouth, I was torn between finding Daniel himself a very endearing character, and wanting the story to hurry up and get to the good stuff in New South Wales. This eventually happened, and Grenville does a marvelous job in giving a sense of place through her descriptions, and portraying the challenges faced by the settlers. Being shy in the first place, and also isolated from his fellow Europeans, Rooke’s POV gives us a removed observation point from which to watch the action unfold in the settlement. I found myself face-palming on many occasions, wishing they would just use some (by my modern-day standards) common sense. Instances like the English speaking to the native people in very slow, broken English in the hopes they would understand seem unbelievable today, yet I know this is what it would have been like. Meanwhile, Rooke is up on the hill, filling his notebooks with vocabulary and grammar, but terrified to let anyone see them, lest it ruin the fragile friendship he is forming with these people.

The relationship between Rooke and Tagaran is a real highlight. At first, Rooke is just pleased that she and her friends are paying him attention because it means he can start making notes on their language. Once they are at a point where they communicate with each other, Rooke develops a real depth of feeling for her that he is unable to describe (it is never explicitly stated that this is romantic, and there are definitely times when she reminds him of his younger sister, Anne, but it could be interpreted that way if you wanted to). When he is visited by other settlers, they express disbelief that he has formed friendships with any natives, because, well, obviously, they’re too primitive. When when of his friends assumes that he must be sleeping with Tagaran, because why else would he be spending time with her, it was pretty heartbreaking watching a shy and flustered Rooke trying and failing to explain that it’s not like that all.

At first it seemed like the part of the book set in NSW ended rather abruptly, followed by a jump in both time and location. But in taking us to the end of Rooke’s life and looking back with him over his years in NSW and the decisions he made towards the end of his time there, Grenville gives a very satisfying conclusion, albeit one that brought a little tear to my eye.

I listened to the Bolinda audio book read by Nicholas Bell. He read in an English accent that suited Rooke’s point-of-view, but was also able to vary that for the other settler characters. I wonder if he studied the Gadigal language beforehand as well, as he seemed to have a good ear for its pronunciation (admittedly, that is coming from an uneducated person who would be unable to tell the difference between one Indigenous language/dialect and another).

Overall, I would recommend this book to all historical fiction fans, Australian or otherwise.

(This review is part of the Australian Women Writers Challenge 2016. Click here for more information).