I did these two book memes at the end of 2015 and enjoyed them, so here I am again to apply them to the books I read in 2016. This was supposed to go up on NYE, but I never got around to it, so the Thursday Book Tag spot seemed like a good alternative.

+ The first 5 books that I read this year:

+ The last 5 books that I read this year:

+ Which book surprised you the most in a good way?

Am I Black Enough For You? by Anita Heiss. Memoir-types are always a bit hit or miss for me and it took a while to get into this one, but I really liked that Anita challenges my assumptions and made me think about racial relations in Australia.

+ Any books that made a really big impression on you and that you think you will carry with you for a good while?

That’s a good question, and sadly I think the answer is no this year.

“Live your fear.” Why didn’t we teach kids that? Why wasn’t that in a graduation speech? Commencement speakers should start telling the truth: “You’re going to fuck up, but most of the time, that’s all right.” – Mara Wilson, Where Am I Now?

+ Finally, my top 5* favorite book covers of the year in no particular order:

Clearly I have a thing for black backgrounds with vibrant foregounds.

*honestly, I didn’t read too many with covers that really wowed me this year.

Finish each of the sentences only with titles of books you read this year:

My family reunions are: The Madness Underneath (Maureen Johnson)
At a party you’d find me with: The Raven King (Maggie Stiefvater)
I’ve never been to: The Life Assistance Agency (Thomas Hocknell)
A happy day includes:   A Stolen Kiss (Kelsey Keating)
Motto I live by: Catch Me If You Can (Frank Abagnale Jr.)
On my bucket list is: Life in Outer Space (Melissa Keil)
In my next life, I want to have: Isla’s Inheritance (Cassandra Page)
In high school I was: Fairest (Marissa Meyer)
People might be surprised: I Hunt Killers (Barry Lyga)
I will never be: The Dragon in the Garden (Erika Gardner)
My fantasy job is: Rebel of the Sands (Alwyn Hamilton)
At the end of a long day I need: Last Call at the Nightshade Lounge (Paul Krueger)
I hate it when: Seeing Redd (Frank Beddor)
I Wish I had: More Than This (Patrick Ness)

(I had to stretch a few of these, but I got there in the end!)

I love me some numbers. And when Yvo over at It’s All About Books did a book stats post for the first four months  of the year, it inspired me to do one at the halfway point.

I have reached the very nice, round total of 50 books so far this year, which makes working out percentages rather simple. This amounts to the equivalent of 12528 pages, which is only about 700 pages short of what I read in all of 2014 combined, and is about two thirds of my page count for 2015 (my total books for 2015 was also 75, so that makes sense).

I’ve been trying to broaden my horizons a bit this year, throwing a few thrillers and some historical fiction into the mix as well as the usual YA and fantasy. I’ve made some nice graphs to indicate the spread of my reading over the past six months.

At first, I was a bit surprised that adult outweighed YA, but it makes sense that combined with NA, the fiction with protagonists my own age or younger outweighed the adult fiction (I’m a month off 27 for those keeping score).

Interesting that I’ve had exactly the same number of 3 and 4-star rated reads, and 8 dead in the middle of that. And yet, I still felt like I’d hit some sort of reading slump when I had a slew of 3-stars where I was certainly enjoying things but not really getting super into them. Fortunately, I’ve only really not enjoyed 14% of what I’ve read this year, and so far I haven’t hated anything enough to only give it one star. Hopefully that run of good luck continues. 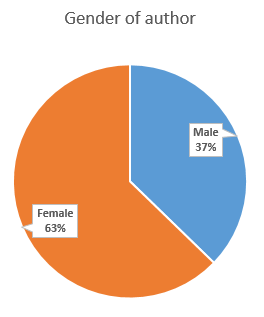 This comes as no surprise at all. While I certainly don’t refuse to read male authors, I am conscious of the gender bias that exists in publishing and reviewing, and I try to do my bit to offset by participating in the Australian Women Writers Challenge, for instance. Having said that, I think I am just drawn to women’s writing more in general, or more women are writing the books I want to read, or something.

You may notice the odd number-ed percentages in the above graph. It’s because Illuminae threw me off, having both a male and female author. Not knowing how proper statisticians might deal with that, I just tallied the 49 other books, then gave each gender another count.

To the surprise of absolutely no one, fantasy wins this category a mile. Of course, that includes everything from urban fantasy to epic fantasy to fairytale retellings and historical fantasy (where I felt that the fantasy played the more major role). I included superheroes under sci-fi, and steampunk under fantasy, even though I wasn’t entirely sure that was the right spot (it maybe should have gone under sci-fi as well.

I actually thought the series count would be higher. It certainly feels like I have a million unfinished series still to complete! (It doesn’t help when new instalments in series take so long to come out!) I’m glad to see this count is actually fairly close to half-half. 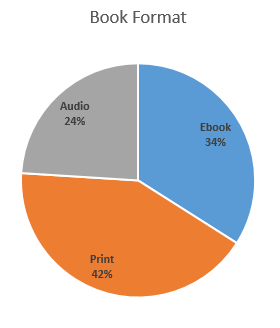 While I do love my Kindle (though I’m using my Samsung tablet for ebooks at the moment and still debating whether to replace my Kindle that died), the library is always the first place I check for a book. I buy print books very rarely now, but it’s nice to see that that number is at the top. And I can’t believe I only discovered digital lending libraries and all the audio books they have to offer about nine months ago. Though I still find a narrator can make or break an audio book.

That’s all I’ve got for now; I hope you enjoyed this rather nerdy post.