WElcome to the Triwizard Tournament Readathon!

This readathon snuck up on me so this is my first blog on the subject and we’re at the end of the First Task. Probably stating the obvious here, but the challenges for this readathon are based on the Triwizard Tournament tasks in Harry Potter and the Goblet of Fire. You can find more info at Chapter Charms.

Teams were decided on by date of birth, and I am on Team Durmstrang. For the first task, I had to Swedish Short-snout.

The prompt: These dragons are sought after to use their skin to make shields and gloves, re-read a favourite that makes you feel protected.

When We Were Very Young by A. A. Milne 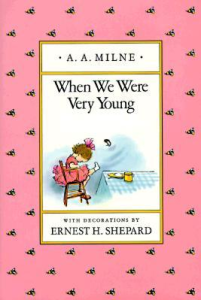 I’ve got to be honest, part of me was freaking out about this prompt because I’ve got so many books to read for the first time right now, and I didn’t think I had time to re-read anything. However, I can always count on the Winnie-the-Pooh books to give me warm fuzzies, and they are very quick reads.

There was also the method of defeating the dragon. I used distraction.

The prompt: Distract your dragon by transfiguring a rock into an animal, read a book with an animal on the cover.

With a cat on the cover! This was a really entertaining collection of short stories. There were some I didn’t really get, but others were fantastic. They were all a bit weird in some way or another.

So now that the first task is over, there is a week until the second task begins. In the second task, Harry and the other Triwizard Champions had to rescue a loved on from the Hogwarts Lake. Durmstrang team members will be rescuing a friend.

The prompt: Read a book about friendship.

Before the Devil Breaks You by Libba Bray

I’m going to hope this works for this prompt anyway! Otherwise there’ll be a mad dash for me to find another one. But there’s such a large cast in the Diviners novels, I figure I’ll be able to make it work in one way or another.

And of course, the question is how do I rescue my friend from the lake? I’m going with transfiguration.

Into the Drowning Deep by MIra Grant

I originally had this book down for the third task, under “read a book containing something you fear” because you can bet I am terrified of the ocean. I mean, I’m happy enough going to the beach, but anything more than a few feet underwater and I start getting bothered. But I didn’t really have anything else for any of the prompts for this challenge, so I’m moving it here. There’s till plenty of time to figure out my titles for the Third Task.

The second task runs from Monday November 25 to Sunday December 01, so I’ll be back with another wrap-up post sometime after that.