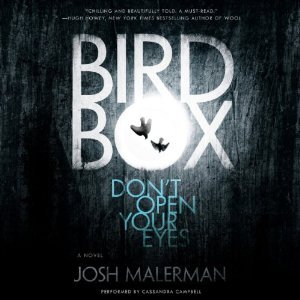 I didn’t really have any intention of reading  Bird Box, but there was a lot of hype about the Netflix movie starring Sandra Bullock, and since I don’t have Netflix, I thought by reading the  book I’d at least have some idea of what people were talking about. It sounds like there were some pretty big changes for the movie, but I’ve got the gist.

For those who missed the hype, Bird Box centres on a woman called Malorie and her children, known only as Boy and Girl. They live in a world where creatures can kill you with a glance, and thus they must wear blindfolds as they make a trip upriver to a safe haven. Meanwhile, we learn what happened to Malorie over the last four years that led to this point.

Malerman definitely created the atmosphere of staggering around sightless. I felt like I was doing the same, feeling around for the picture  frames that have been broken up and secured in the ground outside to lead to a well. Painting the windscreen black and trying to work out your stride length and calculating the number of steps to the street you need were all things that I never would have thought of but that Josh Malerman made sure to cover in his world-building.

My main issue was that I never really cared for Malorie. I recognise that she’s living through something that’s completely and utterly new, and that she’s a new mother surviving on her own with two children, but I couldn’t rid myself of the feeling that there had to be other  ways of training your children to survive than slapping them around and dehumanising them by only ever calling them “Girl” and “Boy”. I never really warmed to any other characters either.

I also found large portions of the book a bit boring. Most of the scenes on the lake weren’t really that exciting. I was expecting a lot more tension than I found. Everything that threatened them on their journey then just left… even the Creature, if indeed it was a Creature toying with Malorie’s blindfold. I think this was what made the book wholly unsatisfying, that the questions that did pop up were never really answered and every time something to be building up, it never ultimately came to anything.

2 thoughts on ““In a world where you can’t open your eyes, isn’t a blindfold all you could ever hope for?” // Review of “Bird Box” by Josh Malerman”