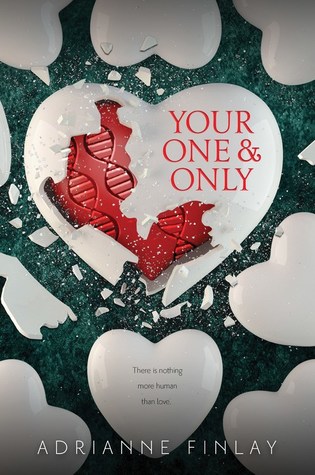 I was approved for this on NetGalley months and months ago, and for some reason kept putting it off. With the publication date looming, I thought I’d better get onto it, and when I did, it turned out to be a compelling read.

Jack is a human in a world of clones. The clones are suspicious of him because his behaviour doesn’t fall in line with theirs, and he doesn’t understand their ceremonies. Althea-310 can’t help feeling different from her sisters and drawn to Jack. As their world starts to fall apart, they find hope in each other.

This is definite soft sci-fi, and while some of the “science” did make me raise my eyebrows a little, I found the story was engaging enough that I was willing to handwave the world-building that didn’t seem exactly right. It did take me a few chapters to get my head around exactly how the communities of clones had come to be and how they lived and reproduced, but I did get there in the end.

I felt for Jack, who was raised in virtual isolation and disliked by the closest things he had to peers. But I was more interested in Althea. I liked seeing her progression from one of the clones to individual and how she questioned what was happening to her.

It did bother me that the clones isolated Jack in part because he had a tendency towards violence, but they couldn’t recognise that many of their own also had these same tendencies. The clones were supposed to be perfect, and Jack was different. I couldn’t work out whether that was supposed to be their cognitive dissonance, or a case of the world-building/story not quite working the way the author wanted it to.

I wouldn’t say the romance is gradual, but it did feel like it unfolded at a good pace. In terms of content, apart from some kissing, there is the clones’ monthly Pairing Ceremony. Though Pairings are never really described explicitly, the clones do discuss how they are taught what each of the other clones likes, and how to pleasure them. I did like this exploration of a completely new culture’s attitude towards sex.

There were a few occasions where the pacing felt a bit off, including at the end (during and after the climax). There were also a couple of scenes where dialogue went around in circles a bit.

I can’t say sci-fi romance is a sub-genre I’ve read much of, but if this is an example of it, then I feel like I should broaden my horizons.

Thank you to NetGalley and the Publishers for a free copy of this book in exchange for a review.

3 thoughts on ““We may have created them, but like all children, they grow up and make their own lives.” // Review of “Your One and Only” by Adrianne Finlay”