At the end of March, instead of writing an unrealistic TBR for just the month of April, I decided to write a maybe-semi-realistic TBR for the next three months. In April, I ticked off five of the books on the list, as well as getting distracted by a few not on the list. There were similar distractions in May, but I still managed to tick off 4 (actually, I’m still reading Magic Study, but I’m hoping to finish it by the end of the week). 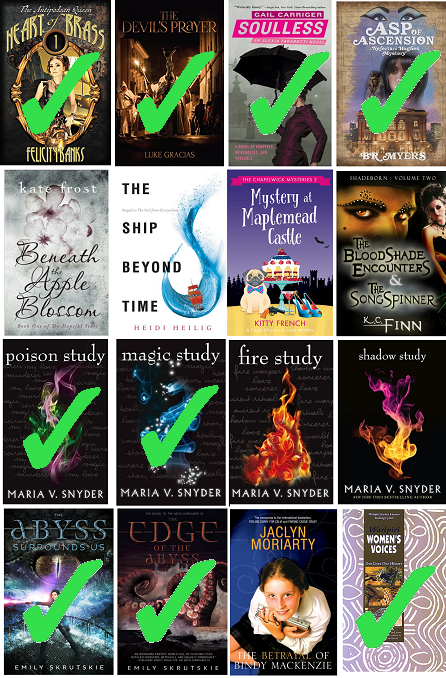 Here are the links to my reviews for the month of May. I did fall off the wagon a little as life got in the way, but there’s still a few.

The Edge of the Abyss by Emily Skrutskie (YA dystopia/LGBTI)

How the Aliens from Alpha Centauri Invaded My Maths Class and Turned Me Into a Writer… and How You Can Be One, Too by Jackie French (children’s/non-fiction)

On Writing: a Memoir of the Craft by Stephen King (memoir)

I also read the majority (bar the last 20 pages or so) of The Dalai Lama’s Cat by David Mitchie. My review isn’t up yet, but I’ll count it for May.

At the moment I am continuing with Maria V. Snyder’s Study series. I own two more books in the series after Magic Study. I also wouldn’t mind reading The Betrayal of Bindy MacKenzie if for no other reason, to nicely tick off the entire bottom row of my banner. I did find that I needed a standalone between the first two Study books, so that may well happen again.

What are you reading this month?