At the end of March, instead of writing an unrealistic TBR for just the month of April, I decided to write a maybe-semi-realistic TBR for the next three months. Of the sixteen books I listed (I ended up not being interested in the rest of the Parasol Protectorate, so that took the total down a bit), I have managed to read five. Well, four-and-a-bit, but when I made the below graphic, I had intended to spend more time reading this weekend than I ended up having time for. As a result, I am only 20% into The Edge of the Abyss, but I had added the tick overlay, so we’ll just have to pretend. 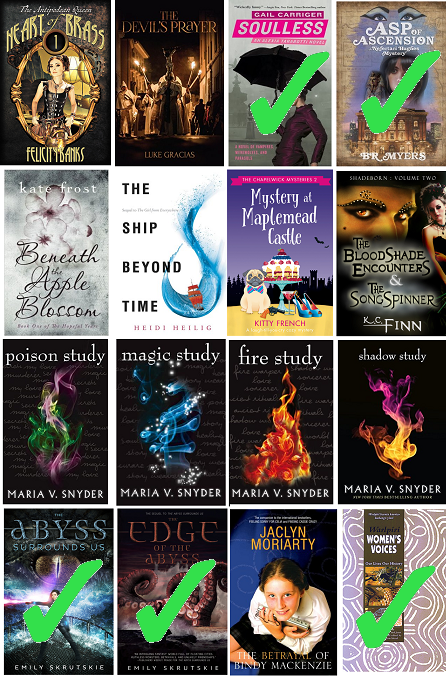 I also read a few books not on this list, such as The Secret Science of Magic by Melissa Keil, The Man from Snowy River by Elyne Mitchell and Puberty Blues by Kathy Lette and Gabrielle Carey, though these last two were audio books, so they didn’t intrude on the physical TBR.

Here are the links to my reviews:

The Man from Snowy River by Elyne Mitchell

The Secret Science of Magic by Melissa Keil

The Asp of Ascension by R. B. Myers

The Abyss Surrounds Us by Emily Skrutskie

My first priorities are Heart of Brass by Felicity Banks and The Devil’s Prayer by Luke Gracias.  The Study series by Maria V. Snyder is also a high priority, and as of last night I also want to (try to) read Dracula by Bram Stoker. Incredible stage productions will do that. May is not quite as busy as April was in terms of uni work and that sort of thing, so hopefully I’ll also be able to power through these.

What are you reading this month?