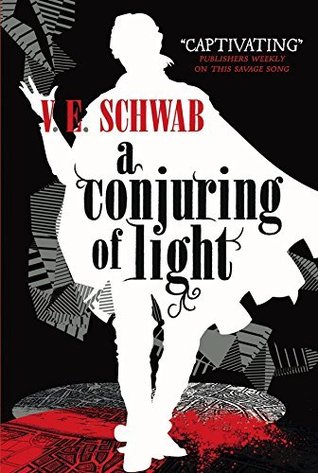 That’s it. It’s time for me to admit that V. E. Schwab and I just aren’t meant to be. I’ve tried, I really have, but with the exception of A Darker Shade of Magic, none of her books have really worked for me. I’ll try to keep this brief, and not too ranty.

The thing is, she is a great writer. She has an amazing way with words. And I think she has great ideas. I think her plotting is where she falls down. In my review of This Savage Song, I noted several moments where I thought the plot or world-building were quite weak, and it was the same in this book. It was too long for a start, and there were so many sections from the points-of-view of characters we barely knew, because they had only ever been on the sidelines in the previous books, if that.

On top of that, this was one of those books where I never felt like the stakes were particularly high, even when I could objectively see that they probably were. The Big Bad is threatening, sure, but he never moves beyond that. He just sort of… hangs around and postures? I get that the idea was that he was robbed of his power source, but it just took the life out of him. And I found I had lost my love for the rest of the characters. I don’t know if that was because it had been so long since I read the previous books, because I was feeling slump-y while reading this, or because eventually the book got too long for me and I just wanted it to be done. But whichever it was, the fact was that I was no longer rooting for them. I’ve got to admit, I kind of ended up on the Holland bandwagon, just because he was more interesting (and I do like hardened characters who make bland comments at the others) though at the same time, I didn’t really see the flashbacks to his past as necessary.

Anyway. Obviously Schwab is a good writer and her books have rave reviews so don’t take my word for it. I honestly think it is a case of “it’s me, not you” and I feel like it is only fair to give an author a decent chance (especially when I did like the first of her books that I read). But now that I’ve concluded this series, it’s time to jump off that bandwagon.

One thought on ““Life isn’t made of choices, it’s made of trades. Some are good, some are bad, but they all have a cost.” // Review of A Conjuring of Light by V. E. Schwab”