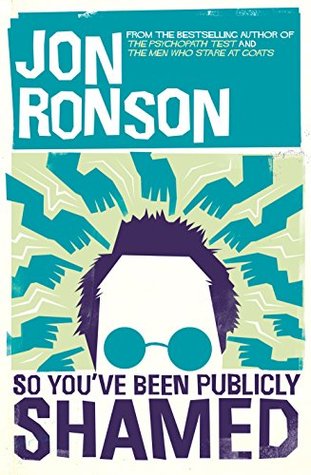 Anyone who has spent more than five minutes on Twitter has probably witnessed a public shaming – when someone posts something poorly worded and the entire Internet sancitmoniously piles in on them. This is the behaviour Jon Ronson explores in this book, and the devastating effects the shaming can have on the person who is at the heart of the scandal.

Ronson focuses on four main case studies, three fo which I recognised, as well as presenting a more general history of public shaming as well as research about the psychology of the crowd mentality and how this pertained to other issues relating to shame as well.

While the content was interesting, I did feel it often went off-topic, and that it wasn’t structured in the best way. Sometimes I wondered exactly what the story Ronson was telling now had to do with the example he been talking about moment before. There were times when he would introduce one of the case studies he used, then go off talking about the Standford Prison Experiment.

Still, it definitely was interesting, and got me thinking. It also made me rather relieved that all I talk about on the Internet, really, is books, and that I usually delete any tweets I tend to start writing about “controversial” topics before I post them. I would recommend this one for anyone with an interest in psychology or sociology, as it is a good starting exploration of these issues unique to the Internet age.