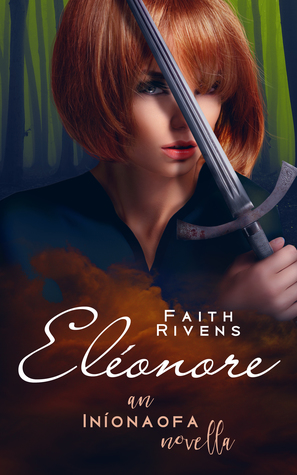 After following the progress of Eléonore on Faith’s blog, I was really excited to finally give it a read. I’m pleased to say that this is a really strong debut with great characters and lots of action.

Eléonore is a librarian by day, demon hunter by night. When a sorceror places a bounty on her head and threatens her son’s life, Eléonore travels to confront him, and has to face some demons of her past along the way.

Firstly, I don’t normally comment on covers in my review, but I just have to say, dayum, that cover. I really love it. That is all.

I’ve realised recently books that are soley about hunting demons don’t interest me that much. However, Eléonore worked for me because the demons weren’t the only magical beings. The sorcerors really helped, as it gave the book a bit more depth that “Arr, demon! Kill it!” which I’ve run into in some urban  fantasies I’ve tried reading recently.

Eléonore is a strong but flawed character. She’s a single mum, and as such, fiercely protective of her son, and determined to keep him separate from the world she inhabits at night. She makes bad decisions, but she figures out how to deal with that. She tries to do it all without help, but she is capable of (eventually) accepting it when it is needed.

The side characters are also well-drawn. I particularly liked Raphael, Eléonore’s love interest, as well as Rosalie, Eléonore’s best friend and confidante. Etienne, Eléonore’s son, was a bit precocious for a six-year-old, but then Eléonore also referred to that being the case. I also really liked the Big Bad, whose name I won’t mention because spoilers, but I thought the story really got going when he showed up. I loved his dialogue; it was great.

The world-building was simple, but I mean that in a good way. The excerpts from Eléonore’s father’s journals at the top of each chapter gave us the information we needed, and that combined with Eléonore’s commentary gave us plenty to go on, and the imagination is able to do the rest. The plot and pacing were never sacrificed for the sake of description. I also really enjoyed the fact that it was set in Quebec, and that there was lots of French peppered throughout the dialogue.

I am still a little fuzzy on why this sorceror wanted Eléonore so badly. I’m not sure if that might be something that will get expanded on in follow-up stories, whether I missed something or if it wasn’t really addressed. That’s really my only quibble, though.