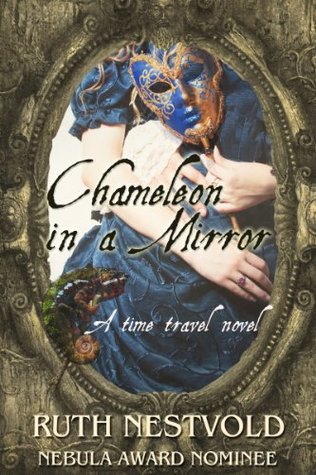 I have to admit I went into this novel somewhat blind, as I had absolutely no knowledge of the time period in which most of it is set, nor one of its main characters, Aphra Behn, a playwright of the time who has somewhat faded into obscurity. I don’t think this was an issue though, as I was presented with a rich setting and fascinating characters that left me wanting to go off and find out more on my own.

Willa Armstrong, aka Billie, has spent the last year in London studying, and the only thing left is her dissertation. She wants to focus on the influence playwright and novelist Aphra Behn had on later writers, however, she is met with resistance from her professors and even her boyfriend seems to be against her. When she reads some of Behn’s poetry in front of a seemingly innocuous mirror from the time period, she finds herself transported back to the Behn’s time and not only witnesses the performances of some of Behn’s best-known plays, but also finds herself entangled with Edward Ravenscroft, a dashing contemporary of Aphra’s who wants her to stick around.

Billie spends her time in the Restoration switching between disguises – Will (in male garb) and Clarinda (in female). She is able to slip in and out of each role with ease, hence the chameleon reference in the title. I thought she adapted to the seventeenth century perhaps a little too easily, and I definitely questioned her decision to actually start sleeping with Ravenscroft (she does hesitate for a while on contraception grounds, but I couldn’t help thinking that surely that was the least of her issues in that time!), but I appreciated that she did still want to return to her own time and modern conveniences; I feel like too often in these types of stories, the characters find themselves really torn between the two times. While Billie did feel this way, I never felt like there was any chance of her deciding to stay.

Aphra Behn was also a really great character. She was very aware of her situation as a woman writer, but she also had a playful side. Scenes where her values were compared to Billie’s were interesting; we like to think that we are far less restrained in the twenty-first century, but sometimes it seems that isn’t really the case. I sometimes found it hard to like the male characters too much, including Ravenscroft. While he definitely had strong feelings for Billie, I couldn’t help being distracted by the fact that he did still see her as more of a possession or a conquest than a human being. Having said that, it is true to the attitudes of the time, so I probably can’t really complain that much. It was also addressed by Billie, which made it a bit easier to take; if she had just been starry-eyed and in love, I would have been a lot more bothered.

The thing I really loved in this book was the setting. Ruth Nestvold has clearly done a lot of research into the period, and I learned so much about it by reading the book. The details were rich, and I really felt like I was walking down those old London streets. Nestvold acknowledges in her author’s note that she took some liberties with history and geography, but the writing still felt authentic. I’m not one who minds liberties in the name of artistic licence so that wasn’t a problem for me.

At times, the story did feel a little bit slow (especially the first third), but if you treat the story as more of an exploration of this personality and the times in which she lived, the the pacing makes more sense. Nestvold also says in the author’s note that the story is more ‘political’ than ‘action-packed’, and the story revolves more around gender politics of the 17th century theatre world and the politics of how people are remembered than any one climactic event.

Overall, I recommend this book for any fans of this period of history and/or of theatre, who are looking to know more.

One thought on “Book Review: Chameleon in a Mirror by Ruth Nestvold”