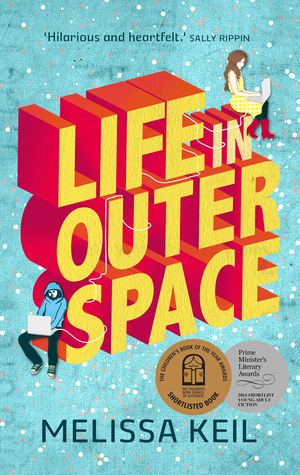 After having enjoyed Melissa Keil’s second novel, The Incredible Adventures of Cinnamon Girl, so much when I read it last year, it was only a matter of time before I sought out her first one, Life In Outer Space. While I didn’t enjoy it quite as much, Melissa Keil certainly has a wonderful narrative voice that makes her books a pleasure to read.

Sam and his friends are unapologetic geeks, just trying to get through the last couple of years of school without getting beaten up too many times by the local jocks. Then along comes Camilla, the daughter of a famous music journalist. She seems to work some kind of magic on everyone in their year group, but especially Sam, and before he knows it, she has completely rewritten his normal routine for him.

I have to admit that one reason it took me nearly six months to get around to this book was that while I was pretty sure I loved Cinnamon Girl for its writing as much as anything, I wasn’t sure I’d be as interested in a book with a male protagonist. Sam is a really sympathetic character, though; he would resonate with anyone who was a nerd or geek as a teenager, myself included. As with her other book, it was really obvious that Melissa Keil has a lot of geek-cred. She didn’t just do a bit of research into nerd culture, she understands completely the references she is making.

I did think that Camilla was a little bit too Manic Pixie Dream Girl (look it up on TVTropes) to feel like a real character. She gets on with both the popular crowd at school and the geeks in Sam’s group, she plays WoW (and is good at it, much to Sam’s amazement), and she’s a super-talented songwriter, though she doesn’t like to talk about it. Still, she wasn’t quite at Mary Sue levels of special snowflake, so I was still able to enjoy her part in the story.

The whole narrative is cute and light-hearted, even when the subject matter gets a bit heavy. My main issue was that I felt that perhaps Melissa Keil had recycled ideas from this book into her second (which I read first), as there were lots of similarities. For example, the main character in this book is an aspiring screenwriter with writer’s block; the main character in Cinnamon Girl is an aspiring comic writer with writer’s block. In both books, a character appears who makes huge changes in the lives of the characters around him/her. However, I was reading fairly quickly and was for the most part able to ignore these.

I definitely recommend Melissa Keil’s work to any fans of contemporary YA. She has a third book coming out this year and she is definitely an author to keep an eye on!