Hello! And Happy Hump Day! I’m pretty excited because I’ve actually been writing this week. As I mentioned in my Sunday Summary, I’m taking a break from Worlds Apart and trying to find a new project. I’ve hit on an idea for the MsLexia Women’s Short Story Competition, so I’ve started working on that. In theory, it will be funny, a bit of a new adult comedy, but I have been known to set out to write lighthearted and end up bittersweet at best, or dark and moody at worst. So I’ll write my 2000 words and see what it turns out like. 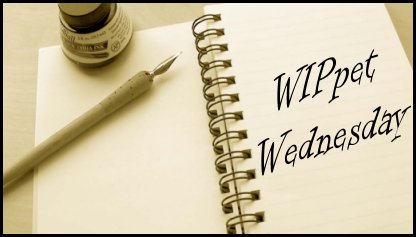 On that note, it’s time for WIPpet Wednesday, a blog hop that I look after in which writers come together and share snippets from their WIP that somehow relate to the date. You can visit other participants or join in yourself by clicking the blue guy at the top of the sidebar. Today I’ve subtracted the month from the date and have eight lines from the beginning of my new story. Amy receives this text message from the university at the end of what should be her final semester of university. See if you can spot the bit that makes her stomach plummet to the floor.

Yeaaaah. That happened. (Also, I’m really wishing I had saved the texts I got from uni at the end of last year so that I could mimic them, because this is not what they actually look like, but I figure it’ll do).

On now to WWW Wednesday, where we answer three questions about our reading over the past week. This is hosted by Sam over A World of Words. You can link up on today’s post on Sam’s blog to join in.

I started The Name of the Star by Maureen Johnson. I’ve followed Maureen on Twitter for ages so I felt it was about time I read one of her books. I’m not very far in yet, though, so I’m still waiting for the ghost/s to appear.

Also listening to the audio of The Secret River by Kate Grenville. I’m not loving it as much as I loved The Lieutenant but I’m going to try to get through the whole thing.

I really loved The Girl From Everywhere by Heidi Heilig. There were a couple of things that annoyed me, like the fact that there was a love triangle (it was actually mostly okay, but now the three of them are traveling together so it has the potential to get annoying in the next book), and that the major conflict described in the blurb actually isn’t that huge in the story, but I still gave it 4.5 stars for the way it cleverly blended different cultures’ mythologies and history. My review will go up this Monday, which is its release day.

After that I read The Ghost Writer by Damon Norko, but it was a bit disappointing. I probably should have paid more attention to the fact that it listed literary fiction along with SFF as the genres on NetGalley. It was trying to be really ~meaningful~, but to be honest, I just found it dull. It’s less than 150 pages long and it took me three days to read. Three!

Yesterday I finished A Method Actor’s Guide to Jekyll & Hyde by Kevin MacNeil. It was… weird and I think trying for postmodern? I enjoyed a chunk around the middle but then the ending was pretty unsatisfying. I did pick it up at the library entirely based on the cover, though, so there was never a promise that I would love it.

Two reviews also went up this week, for Illuminae and The Gospel of Loki.

I got approved for Cogling by Jordan Elizabeth on NetGalley this morning, and I also have Dear Fatty by Dawn French and Sharp Objects by Gillian Flynn sitting on my bedside chest. I picked those two up for free from a mysterious box that appeared at the back of my church with no explanation. So a few of us kind of just figured they were there to be taken.