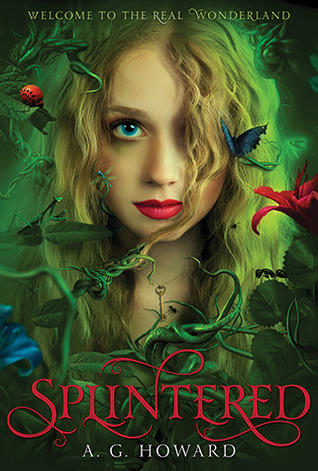 Look at that cover. I had really high hopes for this book, pretty much based on the cover alone. Alas, it was not to be.

In Splintered we meet Alyssa, the descendent of Alice Liddell, the namesake of the titular character in Alice in Wonderland. Her female ancestors have always been cursed, hearing insects talk and other weirdness. Eventually, Alyssa finds out that the Wonderland in the stories is real, that she is the only one who can save it, and most importantly, that her childhood friend, Morpheus, who visited her in her dreams when she was young, is really sexy but less than trustworthy.

I’ll get my ranting out of the way first. Though I only mentioned Morpheus above, there is actually a love triangle, with Alyssa’s best friend’s brother, Jeb, as the other point. Jeb was awful. He was controlling and over-protective, and it drove me crazy. He wouldn’t let Alyssa make any of her own decisions, even though she was the one who actually had latent memories of Wonderland and of the two of them, was going to be capable of getting them home alive.

Morpheus, on the other hand, while definitely morally ambiguous, at least had faith in Alyssa and her abilities. He always let her choose. Even when it often turned out that he was on his own side more than Alyssa’s or Wonderland’s as a whole, he was still preferable as a love interest.

Alyssa as a character was okay. I got the sense the author was trying to make her “quirky” and “alternative” with dreadlocks and a skateboard and that sort of thing, but she still felt pretty bland. She spent a fair bit of time swooning over either of her two guys, though when she was with Morpheus, she did at least want to take charge a bit more.

The world-building itself was pretty good; I’ve read a few Wonderland adaptations before and this one took things in different directions, which I did appreciate, even if I wasn’t entirely I liked the direction. It was definitely a much creepier Wonderland than usual, and some of that I got really into, while there were other parts that made me go, “… really?”

Overall, I felt this book could have been really great, but suffered from objectionable or boring characters. I read a few reviews of the second one because a small part of me was interested in continuing the story, but based on a few things I read, I decided not to. I think it would just make me crankier.

5 thoughts on “Book Review: Splintered by A. G. Howard”