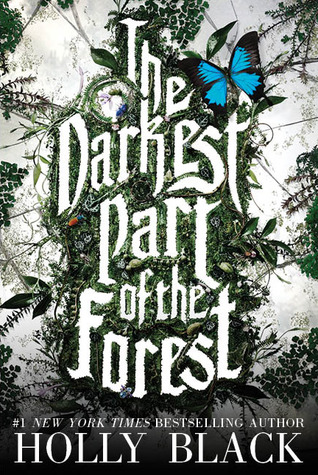 I had really high hopes for this book. The cover blurb made it sound really exciting, and while the reviews were certainly mixed, I was sure that it would be something I would really like. After all, Holly Black clearly knows her fey, and I love my fey, and this certainly sounded like it would be an interesting and fresh take on the fey, but… it all fell a bit flat. There were some moments when I was enjoying the book, and others were I was just really bored.

The Darkest Part of the Forest is set in the small town of Fairfold. There fey leave the Fairfold residents alone, though tourists are fair game. If the fey attack a local, he must have been acting like a tourist. In the darkest part of the forest is a glass coffin, in which lies a beautiful boy with horns and pointed ears. He has been there for generations, and never woken up. Until one day… he does.

The most difficult thing about this book was the pacing. There were a lot of flashbacks to establish important moments in the main characters’ lives, but it slowed down the plot a lot. And while the language used was often crafted quite beautifully, everything was written in such a way that it all seemed to move quite slowly and undramatically, even when something important was happening.

The central characters in the book are sixteen-year-old Hazel and her brother Ben. When they were younger they used to pretend to be knights and hunt nasty fairies. They were also both in love with the horned boy in the coffin. They both harboured fantasies about being the one to wake him. I liked both Ben and Hazel as characters in their own right, and they had interesting character arcs, but neither seemed to go through any enormous amount of development throughout the story. The horned boy isn’t hugely interesting either; given how much of a deal is made of him in the blurb, I expected him to be more of a central player.

I have heard that Holly Black can be a mixed bag, that she writes in very different styles and therefore not everyone likes the same parts of her work. I know she’s got quite the catalogue, so at some point, perhaps I’ll check out some of her other work. But this was certainly a disappointing introduction to her work.

14 thoughts on “Book Review: The Darkest Part of the Forest by Holly Black”