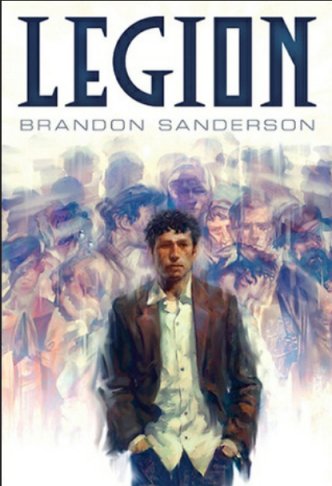 I have a very good friend who is a huge Brandon Sanderson fan, and so I have heard a lot about his work, such as the Mistborn series and the currently in progress Stormlight Archive. However, as I don’t really have the attention span required for epic high fantasy sagas, I had never checked out his work until I came across Legion.
The premise is quite clever. Stephen Leeds is a very unique man; his brain creates hallucinations – “aspects” he calls them – which help him solve problems. All he needs to do is develop a passing familiarity with a subject, and his brain will form a new aspect that is an expert on that same subject. Unfortunately, this means that scientists the world over want to treat him as some kind of guinea pig, though he is mostly able to ignore them now. (It is explained that he is able to own a mansion because he kept asking for unreasonably large amounts of money from the scientists in the hopes it would put them off; it didn’t.)
At the beginning of the novella, Stephen is hired to investigate the theft of a camera that is able to take photos of the past. He is unwilling to work for the agency hiring him, but when they produce photos of his former girlfriend, Sandra, who disappeared ten years prior, he reluctantly agrees.
Surprisingly for such a short work (it comes in around 90 pages), the various characters are all reasonably well-rounded. It is told in first person, and Stephen is very likeable. Each of his aspects tends to be an expert on something, so they adhere to certain… I don’t want to say “stereotypes”, but they sort of are. For example, a shooting range is installed in the mansion for the benefit of JC, the ex-Navy SEAL, though he tends to just shoot the walls instead. Audrey, the shrink, keeps her hair pulled back tight and wears power-suits.
The plot actually gets quite deep, bringing up questions of science vs. religion and whether the two must be mutually exclusive, and asking us what really constitutes “insane”. While it did take me a little while to settle down into the universe, and figure out Stephen’s mind, I definitely enjoyed it once I got into it. The ending seemed a little rushed, and it didn’t tie up all the loose ends, but I am told that Sanderson is working on the sequel, so I’m not too perturbed by that. I just hope that the Stormlight Archives don’t distract him too much and we’ll get to read it soon!

One thought on “Book Review: Legion by Brandon Sanderson”