First of all, thank you for all your good wishes for my job interview today. It went… okay, I guess, but it was the first time I’ve been interviewed for a job at this level (despite acting in a very similar position before), so I wasn’t entirely sure what to expect and despite preparing as best I could, a couple of the questions still caught me a bit off guard. I came up with answers, but they were a bit dodgy. If I get this position, that would be great, but I think I will be chalking this one up to experience and will be better prepared for the other couple of positions coming up in my workplace in the next few months. Of the three positions, this was the one I wanted the least, so while I’ll be disappointed, it could be worse.

Anyway! Onto happier things. WIPpet Wednesday is here again! Want to join in? Simply post an excerpt from your current WIP that somehow correlates to the date (either [date] number of lines/paragraphs/words, etc, something from that numbered chapter; add some of the numbers together for a different outcome…). Then join us at the linky and see what others have shared. I feel a bit bad because I only got around to about half of you last week. I’ll try to do better this week!

I’ve got another piece from Operation: Sugarplum to share with you this week. I’ve added the 2 and the 1 from the day’s date, plus the 8 for the month, and have 11 lines for you. This is very early on in the piece; the second scene in the story in fact. The opening scene is from Max’s POV, he knows Clara”s in trouble and is worried because she’s not answering her phone, then we cut to Clara. There are a couple of lines of dialogue between Clara and her lecturer before this, but the numbers worked better to just start here.

Clara had not been in a class, but she had been on campus, meeting with one of her lecturers to get some tips for the upcoming assignments. She pulled on an overcoat, ran her fingers through her hair to make sure none of it was caught under the collar, and then slung her handbag over one shoulder. There was a spring in her step as she left campus and began walking home, despite it being dark and chilly.

She’d been walking for ten minutes or so when she first thought she heard footsteps on the pavement behind her. She tried to ignore the noise; it was probably just someone else walking home as well. This part of town was full of student share houses so it wasn’t exactly unusual.

When the footsteps were still following her after she’d turned two corners, though, then she started feeling worried. Casting a glance over her shoulder, she saw two figures in black clothes and hoods. She quickened her pace, hoping to keep them away just a bit longer – she was only a street away from her house now – but they matched her new speed. 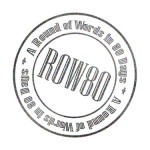 As for my goals, well, as predicted I was so caught up with interview prep that I didn’t get anything done in the first half of this week, apart from add maybe a few sentences to O:S. Once I finish this post, I plan on going and banging on my keyboard for a bit, so that will give me a bit of a start on one of my Mission 101 goals. I was planning on writing during my breaks once my interview was over today, but that didn’t happen because I was feeling more frazzled than I had expected, so I mostly just read my book and daydreamed because that was about all I could concentrate on. Tomorrow I will be in a much better frame of mind.

To finish off, I have a question for you guys. The two most recent books I have tried reading, I have ended up giving up on, just because I felt I should have been more invested in/hook on the story by the point I was at, and I wasn’t. Having said that, I was wondering if I’d given them enough of a chance yet. I was asking my boss about how much of a chance he gives a book, and he told me of the “100 pages minus your age” rule, which seems to be a thing a lot of people advocate. For me, that’s 76, which translates to roughly 15% of either of these books. That’s about how much I give a ebook before I decide to ditch it. Of course, as I get older, that number is going to go down, but I sort of still feel like 15% is a good number (and that of course will go up or down depending on the length of the book). Do you have a rule for how long you stick with a book before you decide not to bother anymore? Or do you just throw it aside immediately if it doesn’t grab your attention?

And with that, I leave you, and go to play some music, before going to bed and reading the book I started today, which captured my interest in the first two pages!